Home / News and Issues that Matter to Wisconsin Public Schools / 2020 Changemaker of the Year: Tara LeRoy 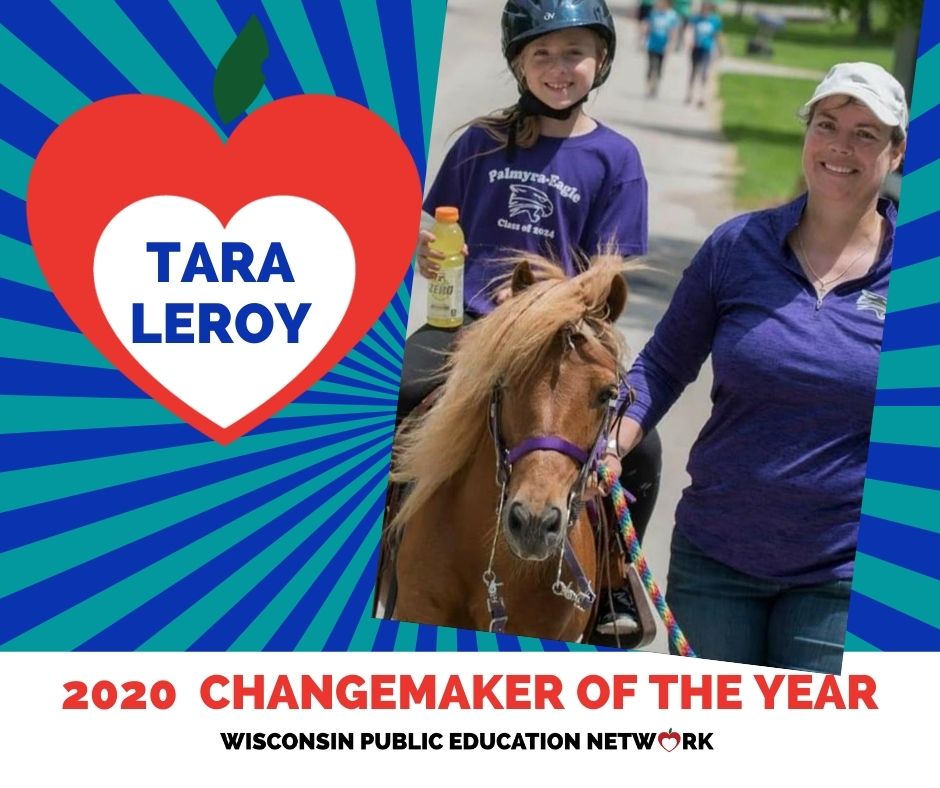 This is the second year of the Wisconsin Public Education Network Changemaker Award, which honors local organizers who motivate their local communities to take actions that lead to statewide awareness and change. The first recipient was Chris Hambuch-Boyle, a community activist and former board member from Eau Claire.

The Changemaker of the Year award recognizes non-partisan, local-level advocacy to support students and public schools. Wisconsin Public Education Network seeks to honor those who take action where they live to increase community awareness of education issues, build relationships with decision-makers and legislators, encourage nonpartisan civic and electoral engagement, and more. There are no restrictions on who can be nominated provided their advocacy is nonpartisan and intended to support strong public schools.

This year there were seven finalists for the Changemaker of the Year award:

The Wisconsin Public Education Network is a project of the Wisconsin Alliance for Excellent Schools (WAES), a 501(c)(3) nonpartisan, nonprofit organization.

The Wisconsin Public Education Network is a statewide alliance of parents, educators, board members, administrators, school districts, organizations, and grassroots groups who are committed to ensuring the success of every student in every public school. They advocate collectively for the resources and support needed so every child at every public school has equal opportunity to thrive in the classroom and beyond. The Network and its partners work together to share information, ideas, and actions that help everyone take local level action that has a statewide impact to benefit children in public schools. Learn more at WisconsinNetwork.org.

About the 2020 Changemaker of the Year Nominees

Andy Brault of the Fond du Lac Education Association was nominated by Kate Pogorelec. As a high school teacher in Fond du Lac and building union representative, Kate said, “Andy has worked tirelessly to help teachers within his district navigate the National Board Certification process, … helped his district see the value in continuing education for teachers, and helps beginning and new teachers navigate the initial phases” of their careers. By volunteering his own time, Andy embodies “the true spirit of someone that is a changemaker within Wisconsin public schools each and every day.”

Brooke Kulzer, an Osceola school board member and advocate with the group Yes Is Best, was nominated by Bob Wright. In nominating Brooke, Bob said she has worked tirelessly to fight for school referenda, always “dogged and willing to talk to anyone,” no matter how busy she was with three kids at home nor how many setbacks the Osceola School District faced. Since 2016, she has fought for three referenda, passing the third and eventually becoming school board president. This spring, Brooke helped the district pass its referendum by being “willing to talk with anyone and listen to all points of view, but not willing to compromise on what is best for the students of the Osceola School District.” As Bob says, “Brooke is an energetic and dedicated advocate for public education, and the kind of changemaker we wish we all were!”

Deb Molle of the Mineral Point School District and the Pointer Pantry was nominated by Maureen “Mo” May-Grimm. According to Mo, “Deb volunteers many hours each month as the school liaison for Pointer Pantry, offering gift certificates to Mineral Point students to the local grocery store.” In doing so, Deb helps teachers in the district assist students who may have been at risk of going hungry, always maintaining a “high level of confidentiality and empathy.” Deb’s work helps move public schools toward equity and makes a real difference in local kids’ lives.

Doug Mering of the Baraboo School District was nominated by Teresa Lien, who calls Doug an “unapologetic advocate for the students in our community.” Doug, working with the school board, the Boys and Girls Club, Kids Ranch, CESA 5, and more, has made himself an active part of professional development, school policy, local equity initiatives, and has been recognized for his work by the Wisconsin Association of School Boards and the Wisconsin Association for Gifted and Talented. A fighter for public education and someone who dedicates his professional and personal time to improving public schools and packing meals for kids, Teresa said, “where there is a need, Doug is there … Doug Mering is deserving of being celebrated as a changemaker for Wisconsin public schools”!

Marilyn Peebles Ruffin, a member of the Sun Prairie School Board, was nominated by Robert Meyer. As the deputy clerk of the school board and a member of the community, Robert nominated Marilyn for her “tireless advocacy for all students of Sun Prairie.” Congratulations to Marilyn on the nomination and for being a changemaker for Wisconsin kids!

Steve Schroeder, President of the Sun Prairie School Board, was nominated anonymously. Steve’s nominator said, “He leads in a manner that builds consensus, but also has the courage to challenge others when it comes to meeting the needs of ALL students. He is a champion for the staff in Sun Prairie and even recently brought about a dedicated health care clinic for district employees and their families. As if this is not enough, he has helped to increase community awareness of education issues through the writing of several resolutions; many of which have been shared state-wide. Further, he supports hundreds of administrators from all around Wisconsin in his role at the Association for Wisconsin School Administrators (AWSA). I admire Steve’s drive, dedication, and determination to do what is right — even when doing what is right is not easy.”

Vanessa Moran, a former principal in Little Chute and a member of the Howard-Suamico School Board, was nominated by State Representative John Nygren. In nominating Vanessa, Rep. Nygren said, “Vanessa Moran is a tireless advocate on behalf of our kids, both in her role as a school board member and as an elementary principal in Little Chute.  She has done regular outreach to not only me, but Representative Jim Steineke, Senator Rob Cowles, and Congressman Mike Gallagher as well. Vanessa also understands that for relationships to be most effective, they need to be more than simply one sided. She does not simply come with asks, she takes the time to understand who we are as legislators and as people. I believe Vanessa has learned from me as I have learned from her.  I now view her as a reliable and passionate advocate of education, as well as a trusted friend.” We thank Vanessa for standing up for kids and public schools in her productive outreach to decision makers!

Tara LeRoy received the 2020 Wisconsin Public Education Network Changemaker of the Year Award at the Summer Summit on Friday, July 24. Nominated by Tammy, Chesney, and Chase Urban, Tara wholly embodies the values and dedication of a changemaker for kids in public schools. Tara is a Palmyra-Eagle School District parents who catapulted herself into action during and a failed 2019 referendum, when she dedicated herself to fighting the dissolution of the Palmyra-Eagle School District. Her nominators called her the “pied piper of the Palmyra-Eagle School District” as she organized her local community, saved the district from dissolution, and won a seat on the school board. She continues to advocate for the children and public schools in her community through inspired leadership.

Tara’s commitment to her school district and the children in her community is a perfect example of the local-level action with statewide impact that it takes to stand up for the 860,000 kids in Wisconsin’s public schools. Her nominators said, “Tara has taught us all to never give up. She has shown us that with hard work CHANGE is possible.” Wisconsin Public Education Network joins advocates around the state in thanking Tara, for showing us that courage is contagious, and congratulates her on being our 2020 Changemaker of the Year!

View this release as a pdf here.