Buyer Beware: You Get What You Pay For With Fast-Tracked Teacher License

Home / News and Issues that Matter to Wisconsin Public Schools / Buyer Beware: You Get What You Pay For With Fast-Tracked Teacher License 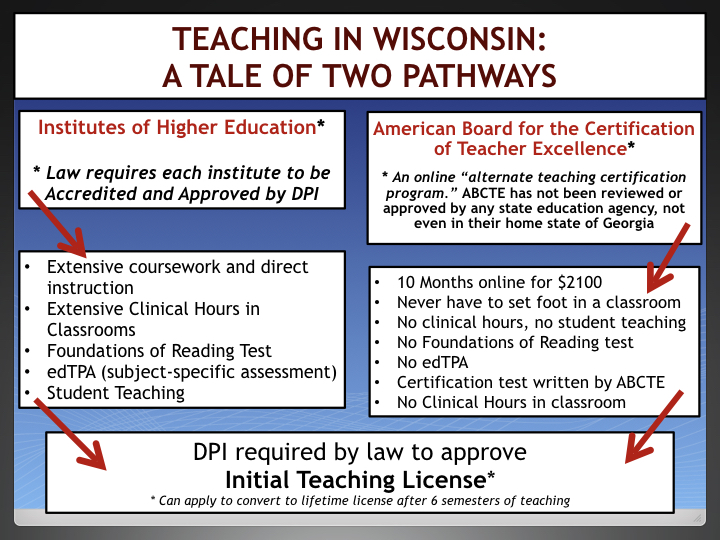 Buyer Beware: You Get What You Pay For With Fast-Tracked Teacher License

A “sponsored ad” has started to pop up on our social media feeds, and we’ve been getting some questions on the validity of a Wisconsin teachers certification program that promises you a license without taking the edTPA. Can this be for real?

Wisconsin Public Education Network’s Executive Director, Heather DuBois Bourenane, shares her concerns about this new creditial – and where it came from – in the article below originally published in Union Labor News.

In case you missed it…

There was a Black Friday deal this year that surprised a lot of people who care about public schools.

An Atlanta-based outfit you probably never heard of, the American Board for Certification of Teacher Excellence (ABCTE), was having a doorbuster.

That’s right. For the bargain price of just $1700 ($1600 on Cyber Monday!), you could sign up – online – for an online program that would get you a bona fide teaching credential in the state of Wisconsin in just ten months.  Without ever having to set foot in an actual classroom.

No student teaching. No clinical hours in a classroom. No state-mandated certification tests. In fact, the only test you’ll have to take is the one written by the ABCTE.

This chart, compiled by Dr. Tim Slekar, Dean of the School of Education at Edgewood College, details the significant differences between a tradition license path (through an institute of higher education) and the new path (through an online vendor):

Perhaps the most significant difference is that every single institute of higher education has been fully vetted and accredited by the Department of Public Instruction. These institutions are held highly accountable to ensure that educators are prepared to meet the unique needs of our students, and potential teachers are subject to rigorous testing and classroom preparation that ensure only those educators best equipped to enter the classroom are even eligible for a license.

Dr. Slekar worries that “The type of fast track licensing offered by ABCTE should be approached with extreme caution considering that this license is granted without any classroom experience.  Imagine hearing that your surgeon had never actually worked in an operating room.  Well, you don’t have to when it comes to the  ABCTE licensed teacher in front of your child.  Is this what we want for all of the children in Wisconsin?”

Slekar adds that the problem of fast-tracking teacher licenses is a problem for parents and professional educators alike. “We should all be worried when a “license” factory like ABCTE is given legitimacy in Wisconsin,” he told me. “It is demeaning to all of those hard working and talented teachers that devote a lifetime to be called professional teachers.” And, by extension, it’s demeaning to the students they serve.

Education advocates and teacher education leaders around the state share concerns that a new wave of under-credentialed educators could put our children at a serious disadvantage, and damage Wisconsin’s continuing efforts to deliver a world-class public education to every child.  At a time when Wisconsin public schools are facing significant challenges related to teacher shortage and inequitable funding across districts, this “easy path” to licensure could be attractive for would-be educators, and it could be tempting for districts desperate for staff to hire them.

Reid Riggle, co-chair of the teacher education program at St. Norbert College and president of the Wisconsin Association of Colleges for Teacher Education, shared his concerns with the Milwaukee Journal Sentinel:

“What’s going to happen is people who are underprepared will get hired in schools specifically where there are shortages,” Riggle said. “Those are often the schools with the highest needs — MPS, Racine, Beloit, a lot of rural schools where they can’t hire anybody,” he said.

“And it’s going to take what is already a significant equity gap in our state (between poor and minority students and their white and affluent peers) and make it worse.”

How did Wisconsin, a state with a national reputation for rigorous teacher training and licensing requirements, allow this? Why didn’t people speak up against it?

The answer to this one is more disturbing that the Black Friday sale.

The measure was slipped into the budget at the final hour without public comment, and passed by the Joint Finance Committee. While DPI, WEAC, and others tried to sound the bell, the public was largely unaware and the provision was included in the final budget passed by both houses and signed into law by the governor.

But how did it get into the budget in the first place?

We don’t really know. There was no buzz about the measure during a long and contentious budget process where public education was the number one issue at every public hearing. There was never a stand-alone bill on the measure. And it’s hard to follow the trail of who behind the scenes was in favor of the changes. But we do know that one company that stands to benefit from the change has been lobbying Republican legislators for several years, trying to get into Wisconsin. That company? You guessed it: American Board for Certification of Teacher Excellence.

The good news is that while DPI is now mandated to give them a license, no district is required to hire the under qualified individuals certified through ABCTE or other online teaching outfits that are now eligible to offer teacher training in Wisconsin.

If there’s one place Wisconsin public schools don’t need to be looking for a bargain, it’s in preparing the educators we trust to meet the needs of our children every day. Our students deserve the best, and we trust Wisconsin school districts will look carefully at applicants and set a high bar for excellence when making hiring decisions.

But buyer beware: if you’re looking for a teaching job in Wisconsin, you’re going to get what you pay for. And don’t be surprised if the 10-month training program you thought was such a steal on Black Friday turns out to have looked better in the ad than it did once you tried it on.

There are no refunds, and no re-dos, on a public education. Let’s make smart choices on how we educate our children, Wisconsin. And let’s start holding lawmakers accountable for doing the same.